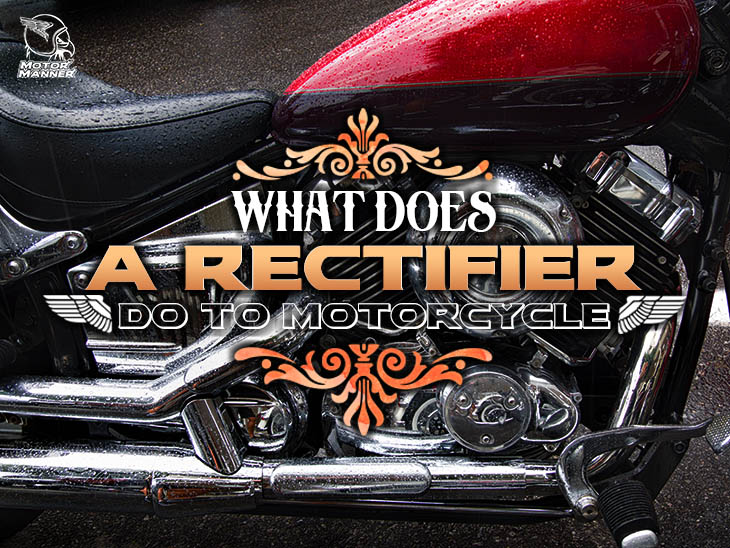 What Does A Rectifier Do To A Motorcycle?

What are rectifiers and what purpose do they have on bikes? That’s one question we will answer in this article.

Motorcycles are fascinating machines. These two-wheeled engines never cease to amaze motorcycle heads and continue doing what we love, riding.

The essence of freedom while on the road is a very fulfilling experience for bikers. The adrenaline on those dirt bike tracks also gives out that unique excitement that dirt bike riders seek, both in professional and amateur worlds.

Do You Know Exactly What is High Mileage for Motorcycle?

How To Test A Stator: The Proven-Effective Methods To Use

The more we know about them, the better we are in keeping them in tip-top condition. This article’s topic is about what a rectifier does to a motorcycle. Fortunately for you, we gathered some thoughts about it and decided to put it into writing. If you happen to stumble upon this article, then there’s a big chance you are having some trouble with the rectifiers in your bikes and are seeking help online.

Or, maybe you’re just a curious cat searching for knowledge on a daily basis.

Whatever it is, the following paragraphs should be of much help.

Before getting there (if you have spare time), have a look at some videos that make motorcycling an exciting hobby, or a profession:

What Is A Rectifier Anyway?

By definition, a rectifier is an electrical device which converts alternating current (AC) into direct current (DC). The said process is known and termed as ‘rectification’.

When observed by physical form, rectifiers take a number of appearances. It can have copper and selenium oxide rectifiers, vacuum tube diodes, semiconductor diodes, silicon-controlled rectifiers and semiconductor switches that are silicon-based.

To make things simpler, here is a video explaining what a rectifier is and what it does. Much thanks to AllAmericanFiveRadio for putting this up and let everyone learn about it:

What Are AC And DC again? I Heard They’re A Great Band

No, AC and DC were not named after a band, it’s the other way around - actually. In electricity, alternating current (AC) occurs when a conductor or semiconductor has charge carriers that periodically reverse their movement or direction.

Thus, the term ‘alternating’ current. In houses or practically any establishment, the current that comes out of the electric outlet would be AC and is usually 60 hertz, 50 for other countries.

On the other hand, DC (direct current) is the unidirectional flow as opposed to AC. The term DC is used to refer to the voltage whose polarity never reverses.

Here is a video on AC and DC explained:

What Are The Uses Of Rectifiers?

Throughout history, synchronous electromechanical motors and switches have also been used. Early radio receivers, also known as called crystal radios, used a fine wire (as thin as a cat’s whisker) pressing on a crystal lead sulfide to serve as the point-contact rectifier or its other term: "crystal detector". Rectifiers have tons of uses, but they are often utilized as components of high-voltage direct current transmission systems and DC power supplies. Rectification may be purposed other than to generate direct current as the power source. Rectifiers are mainly used to power radios, televisions, computers, computer equipment, monitors, toys, phones, and other devices that need a steady supply of DC.

Think of it as a battery that is plugged in from a power outlet that produces AC. Also, an electronic filter, mostly in the form of capacitors, smoothen out the rectifier output to produce a steady current. In a reverse perspective, a component that converts DC to AC is called an inverter, which is another story.

Why Does A Motorcycle Need A Rectifier?

A rectifier’s purpose on a motorcycle is the same thing a regular rectifier does to other electronic devices in the household, office, or virtually anywhere that has a device plugged into an electric outlet. It converts alternating current (AC) to direct current (DC).

Why do you need this on your bike, quad bike, dirt bike, motorcycle, and such? Simple, your bike is equipped with an alternator. This means that your two-wheeled (four or three for some) modern horse takes power from the running engine and converts it to something like powering your light bulbs, beeping your horns, and other stuff your bike does that need DC power. To illustrate further, think of your bike’s alternator as a generator. This generator represents the power plant in your town, or simply put an electric generator. Everyone knows that we get household power from our local power plants.

Same thing with your bike, it has an alternator that is hooked up to the engine to convert that power into DC and store it to your bike’s battery which is ultimately used in various ways: lights, horns, readers, and other stuff.

Now, you need something to convert that AC power that gets out from the engine or motor and convert it to DC. This is where rectifiers come in since the current coming from your engine and then through your alternator is raw AC.

You can’t just hook up your alternator and expect your lights, meters, and horn to work. Basically, rectifier’s job is to convert all that AC power into DC and have it ready in 12 Volts.

This is the voltage requirement for your bike’s electronic gadgets. To make sure that we get a steady supply of 12V and not get more than what is required, a voltage regulator is paired up with the rectifier.

If your bike’s alternator generates too much voltage, the risk of overcharging the battery will be high. Not to mention it will also burn your bike’s electronics.

On the other end of the spectrum, if your alternator generates way less voltage than needed, it will drain the battery and leave you stranded on the road. Nowadays, a rectifier/regulator combo is mostly installed to pair up with the alternator.

Now that you have learned what a rectifier’s purpose is on a motorcycle, here’s a sort of reviewer in the form of a short video that includes an explanation of a bike’s rectifier:

Let us know what you think in the comments below.