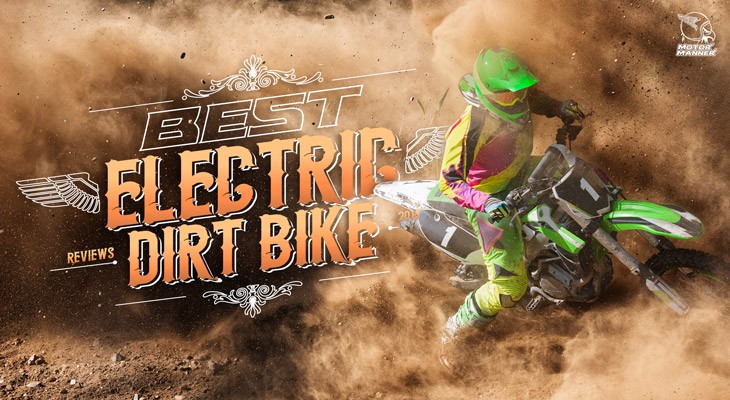 Best Electric Dirt Bike: What You Need To Know

When you’re looking for the kind of fun that can get people out the door, it’s hard to do better than a dirt bike. With one of these ready for rough duties, you’ll be seeing friends and family drop whatever they’re at to have a go on these electric-powered motorcycles.

You‘ll have some choices to make based on speed and quality features, as with any standard motorcycle. We will help you figure out which of these is the best electric dirt bike to get for yours and your family’s needs for roughing it on two wheels.

The following is a small selection of electric dirt bike reviews that feature Razor models with good build, handling, and performance.

**You'll find my more detailed reviews about the electric dirt bikes below, but you can also click the links to get more details from Amazon.

A Roll Through The Best Dirt Bike Tires Reviews

Choosing The Best Motocross Boots For Your Dirty Riding There are a few things you’ll need to know before choosing one.

First of all, there are many models for younger and lighter riders, but most present few variations of maximum speeds, frame designs, and styling features. Secondly, Razor currently dominates the market for affordable and decent electric bikes, which is why we’re covering their best models here.

Newbies who have much to learn about necessary bike skills will find these smaller bikes to be a lot of fun while practicing. Bikes powered by electric motors are much easier to maintain in the long run and are mostly quiet in operation.

Electric types do have some issues that you need to consider. Electric motorcycles hardly offer the kind of roaring experience that powerful gas-powered models can offer on the open road.

Small-framed dirt bikes with sub-100 CC gas engines can typically attain maximum speeds from 35 up to 50 mph and even faster. Most electric-powered models costing less than a thousand are not going to reach anywhere near the same top velocities on level pavement.

Without any need to handle the oily and gritty messes of combustion engines, there obviously won’t be as many occasions to teach new riders how to be responsible with maintenance and upkeep.

The big benefit of using an electric dirt bike is found in its clean and convenient, all-electric mechanism. As a bonus, these things can be unexpectedly quiet while rolling around on neighborhood roads.

Many electric dirt bikes have handling and ride characteristics that are customized for their market. Since there’s no need to deal with a mechanical gearbox, these are more intuitive to use and easier to learn. Electric motors can offer almost immediate torque at just about any rpm, and the motors mounted on these models are typically tweaked for safer and smoother starts. The popular Razor models we reviewed here are all configured to ensure that riders won’t be able to go on freaky speed runs.

Such bikes tend to be cheaper to operate than regular gas-powered dirt bikes, requiring hardly any daily maintenance. Since electrics don’t burn gasoline and emit exhausts, their riders won’t be inhaling and gas and exhaust fumes.

These don’t usually cost much more than gas-powered models of the same frame size, either. But for speed, it can be challenging to find gas-powered bikes that can equal or exceed similarly priced electric-powered bikes in overall performance.

These compact bikes are scaled-down and slower versions of regular dirt bikes. You must consider a model’s weight and height limitations before deciding on its other merits.

Be aware that teenagers do get taller and may outgrow their current bike in a few more years. You might consider getting a somewhat larger model that can continue in rugged service for years to come.

Here is a video on electric dirt bikes:

Even though modern SLA battery packs hardly ever require maintenance, it’s best to keep these hooked up to their chargers and fully topped-up as much as possible. This is done regularly in order to keep them from suffering losses in capacity due to under voltage operation.

Packs subjected to such conditions can be permanently impaired, with their rated capacity diminishing over time.

Take A Look On The Best Electric Dirt Bike Reviews

Razor’s MX350 is a great model for smaller adults and older kids that’s appropriate for those who weigh not much more than a hundred twenty pounds. If they already know how to ride bikes, they should be able to ride this one safely.

Speeds tops out at about 14 mph on pavement, but be aware that these slower types of bikes still aren’t street legal. This model is quick enough that riders must wear full-face helmets and rubber shoes, and perhaps elbow and knee pads as well.

The 350-Watt motor provides less torque at the low end as it starts at slowly and then ramps up at higher speeds. Electrics are much quieter than bikes built around gasoline motors, thus and their riders shouldn’t disturb neighbors when running about at full speed.

The throttle control on the handlebars isn’t variable-speed but a single-speed type that basically opens and closes with a twist of the grip. As the motor’s torque is comparatively lower at slower speeds, the bike will not readily move forward whenever its throttle is suddenly applied. 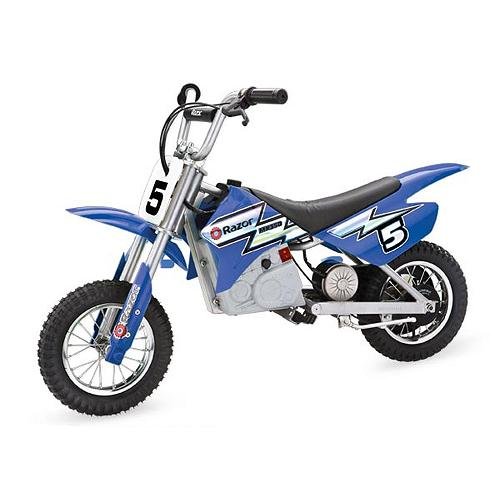 There is no suspension on this bike, although it’s built on a solid and durable tubular steel frame with a durable finish. Kids may find it somewhat rough on their behinds, but should be able to handle or outgrow it.

It rolls fine on dirt and very nicely on grassy fields, although hills with steeper inclines are going to be a challenge on long climbs. If you weigh a bit too much or if the climb is too steep, the electric motor may begin overheating and in the worst case blow its fuse. In sandy and another shifting terrain, this model will likely be overwhelmed before it gets far.

The seating is set about 19 inches above street level, with handlebars set 31 inches above, and once assembled the frame measures 44 inches in length. The motorcycle itself weighs about 65 pounds, which shouldn’t be hard to manage for young adults and bigger children to handle.

You must initially charge the bike’s 24-Volt SLA battery pack for a minimum of 12 hours, after which it may be recharged every night for a minimum of 8 hours or more. Full charges will typically provide about 30-45 minutes of nonstop operation in mostly light use.

Razor’s electric MX350 Dirt Rocket is a talented bike that can be a bit limited by its motor’s lower output and basic suspension. But given these carefully designed limits, you may find that there’s more than a little fun to be had in rolling it out for some quiet moves.

Not for the heaviest and largest riders

Razor’s SX500 is an affordable yet capable electric-powered dirt bike that’s designed to be an easy blast to ride. With its big 16-inch pneumatic front tire and 14-inch rear, the tweaked frame and fairing design are finished in McGrath’s signature look.

The dirt bike geometry results in seat and metal foot pegs that are still easy to mount. The frame is sturdily built with reinforced steel tubes as well as riser handlebars that can be raised or lowered for better handling characteristics.

The bike’s suspension features oversized shocks at the rear and hydraulic forks at front. These features combine with the dual disc brake system to enable an easy and well-behaved ride for bikers.

The 36-Volt SLA battery pack must first be charged for about 12 hours, after which it can be recharged every night for a minimum of 8 hours. Full charges should net about 30-40 minutes of nonstop operation for riders who weigh less. 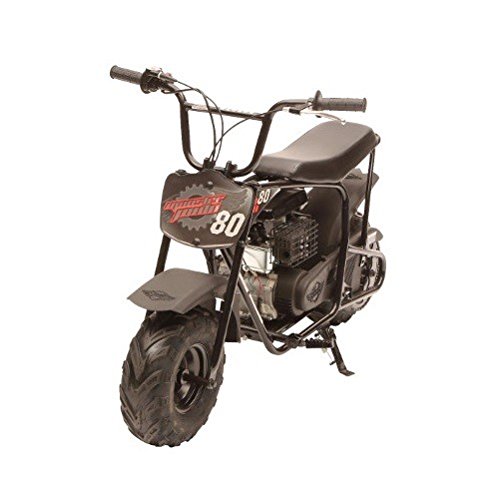 The package arrives pre-assembled except for the handlebars, which is standard for this type of bike. Razor’s SX500 McGrath Dirt Rocket Electric Motocross Bike is a good budget electric dirt bike that’s ideal for lighter riders to practice riding.

Not for the heaviest and largest riders

Razor’s MX650 is part of what is likely the best electric dirt bike range in the market, and this is presently their largest version. It’s a well-built bike that has the potential for a lot of fun outdoors.

It presents the dirt-eating style of larger Motocross designs but in a more compact form that’s easier to maintain and operate. It can be a great choice for small adults and teeners who will be able to use its higher output power and more proficient suspension to better effect.

Riders who weigh under 200 lbs. should find it a blast. This is due to the higher power of its 650-Watt motor, which is mated to a variable-speed chain powertrain. Altogether, the combo can quickly reach a maximum 17 mph speed with lightweight riders.

There won’t be a lot of power to climb hills or traverse bad terrain like motocross veterans do, for this is no gas-powered rock climber. But it does offer fun rides where new riders can learn how to handle bikes about the block, all without the noisy mess of a gas-powered motorcycle. 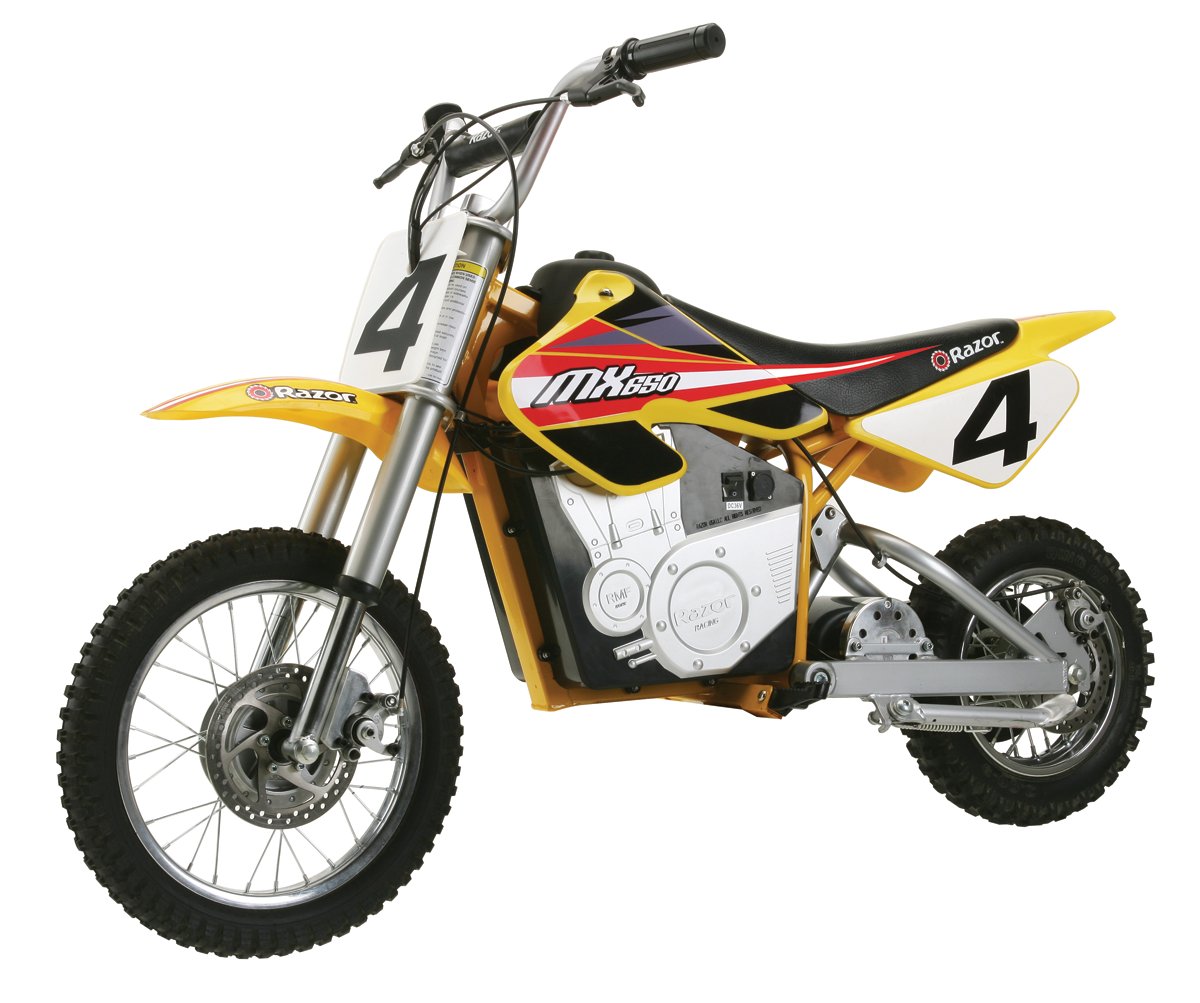 The dual suspension and pneumatic tires allow it to track directly down smooth pavement and tracks. This will be reassuring to newbie riders who are only beginning to master the required skills.

Riser handlebars, a double fork, and full suspension all work together to enable riders to do long and steep uphills and navigate rougher trails. Front and rear brake controls and the easy-twist throttle grips are readily grasped and manipulated for simple yet confident control.

You must initially charge the bike’s 36-Volt SLA battery pack for about 12 hours, after which it can be recharged every night for a minimum of 8 hours. Full charges should net about 30-40 minutes of nonstop operation for riders who weigh less.

Just in case you have not figured it out, we have to tell you that this model isn’t close to being a real motocross model. It’s not built for traversing rough ground or deeper mud and water.

However, it’s our pick for the best electric dirt bike that heavier adult riders will find a joy to run riot with, especially if a regular gas-powered model isn’t around.

A little assembly is needed

Electric Bikes In The Rough

Whatever you choose, always make sure to adjust seating and handlebar heights. Then ensure that new riders learn to wear proper protective gear including a helmet, pads, and rubber-tipped gloves and boots before they get rolling.

We believe Razor’s MX650 Dirt Rocket is the best electric dirt bike for riders who don’t weight over 200 lbs. The convenient and trouble-free electric operation was a revelation.

For teens who may want a more themed experience, you can’t go wrong with Razor’s SX500 McGrath Dirt Rocket with its aggressively styled look.

If you enjoyed reading these electric dirt bike reviews, do leave a comment to let us know what you think!