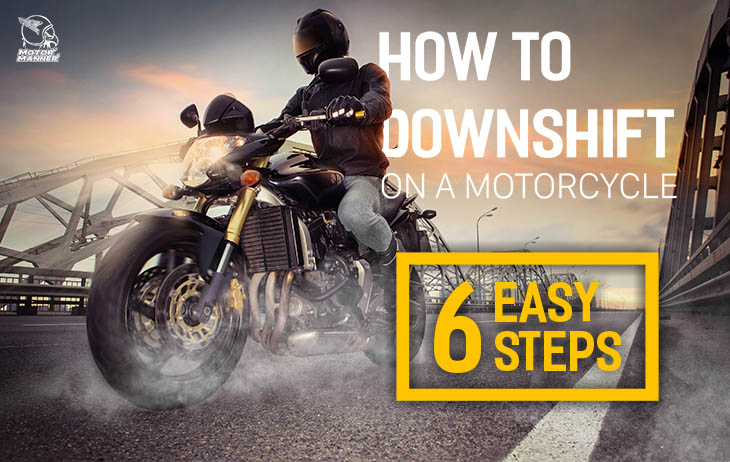 How To Downshift On A Motorcycle Smartly And Match Revs To Road Speeds For Smooth Rides
Have You Known How To Downshift Properly?
6 Easy Steps Will Teach You To Rev Downshift
Modulating Brake With 2 Fingers
Pulling The Cluth Fully
Revving Up Carefully
Shifting In Specific Situation
Releasing Brakes And Cluth Immediately
Redoing Usually
Let’s Practice Now!

How Many Volts is A Motorcycle Battery Charged With?

How To Jumpstart A Motorcycle When You Are Stranded?

You’ll soon figure out how to engage your motorcycle’s manual transmission once you start learning how to ride. Downshifting is as vital as going up the gears, so it’s good to do it well.

Good downshifts require the use of your two bodily pairs of feet and hands. Your body’s left side will take care of downshifting gears and opening the clutch, while your right will handle throttling and modulating the brakes. To downshift smoothly, you will have to blend their actions into a harmonious sequence.

Your ability to brake and throttle in tandem with clutch operation will be important to managing engine rpms and road speed. Once you’ve gone over these guidelines on how to downshift on a motorcycle smoothly, you’ll be levelling up your biker skills and enjoying your rides more.

Have You Known How To Downshift Properly?

There is actually more than one way to downshift a motorcycle transmission. The simplest method is to just notch one gear down without releasing the clutch, by pressing a bit on the on the shift lever and closing the throttle as you roll. This technique can result in more wear and tear on the bike’s transmission, though.

A more acceptable method is one that most newbies start with. With this, you first pull the clutch lever all the way in before switching to the desired gear, then slowly release it for a regular downshift. But the best technique involves matchings revs while downshifting, which is the one I will cover here. This can be a good training method for it teaches disciplined control of the clutch, but it isn’t very efficient. But there is a quicker way of matching your engine’s revolutions to your road speed for smoother downshifts. As you acquire more proficiency and confidence on your bike, you will eventually figure out that you can release the clutch sooner after gear changes with quick blips on the throttle.

Knowing how this works is essential to righteous downshifting. You match engine revolutions in order to have the speed of your rear wheel correspond to the rpm rate required for that speed in lower gears. If done roughly, the rear tire can lock up as it fights for traction and worsen your rolling behavior, which could lead to a crash.

Some riders prefer to keep the throttle mostly closed, blipping it up with a snap of their wrist as they match revs. Others like to keep it open even as they do so. Either way, you will constantly need to modulate your brakes as you lightly regulate the throttle. The gear selection and changeover itself is rather easy to do, especially if you preload the shifter.

6 Easy Steps Will Teach You To Rev Downshift

Proper hand positioning on the bars’ grips is important to making these actions easier to carry out. With your left foot and hand controlling the bike’s transmission, you use your right foot and hand to handle braking in addition to the throttle. New riders will eventually get used to manipulating the brake lever with just a finger or two, which is necessary for doing smoother downshifts as I will describe. My own preference is to use my middle and index fingers to modulate braking and for my little and ring fingers to handle throttling. Just as you start braking slightly, pull the clutch lever in before choosing gears as you regularly would. Make sure to pull it fully to ensure the kind of seamless shifting that reduces unneeded wear in your transmission system, and to begin modulating the front brake immediately as you do so. You could apply both brakes, but don’t forget that the brake and throttle levers have to be controlled by your right hand. As you continue to hold in the clutch and prepare to downshift, use your palm or your ring and little fingers to rev up rpms a bit. Or you can use your index finger and thumb for throttling duties while you apply the brake lever with the other three, it’s your choice as to which makes more sense. Just remember to open the throttle up to around 50%, especially during complete turns, and to learn from experience how much to rev up in all situations.

Downshift to the gear you need, either to the next one or to another further down, even to first gear. Your choice here naturally varies according to the situation you’re facing. You should be ready and know how to downshift in anticipation of upcoming traffic slowdowns, turns, stops, and so on. To make the series of steps easier to apply, many riders like to put two fingers on the clutch lever so that it bumps against the remaining ones, signaling that it has been pulled effectively. The lever still needs to be pulled in enough to release the clutch plates, but no farther. A tip: you can try preloading the shifter by pushing it downwards just before releasing the clutch, so that the transmission will quickly engage successive gears.

With the engine revving a bit, release the brakes and then release the clutch lever immediately after so that the transmission quickly slips onto the chosen gear. You are aiming to match its revolutions to the rate the engine requires for travelling at the same road speed with the lower gear engaged. This works to smoothen out changes between gears, lessening the need for you to slip the clutch too much in response. As engine rpms must naturally rise in lower gears, it’s simply a matter of applying enough power to match. Of course, if you are slowing down or stopping then you must throttle down instead. But if you are planning to reenter lower gears and keep rolling, you will have to maintain throttle until you release the clutch and slip into the next gear. Once you know how it’s done, you should be able to downshift smoothly without much change in the motorcycle’s running behavior as you roll on. If it does jerk frontward once you release the clutch, it means you were revving up a bit much, so regulate your throttle a bit lower the next time. But if you rapidly slowed down, then the engine was not revved up enough, so remember to regulate for slightly more power next time prior to releasing the clutch.

Here is the video that will clear the guideline for you:

Rev downshifting is among the more critical riding skills that you ought to master for a more satisfying ride. You will at first try the technique as separate actions, but with continued practice, you will ultimately learn to blend these into a flowing series. The method is particular good for downshifts into lower gears, as these normally involve wider jumps across gear ratios. Matching revs and speed will eventually become second nature to you on the road if you regularly apply the technique. Once you get the hang of it, you’ll be ready to downshift smoothly like the veterans in most situations.

Hope that after reading this article, you will know the right way to downshift a motorcycle. Let us know if you have any comment or if you want to share your experience. Feel free to share this article to anyone with the same question as you.