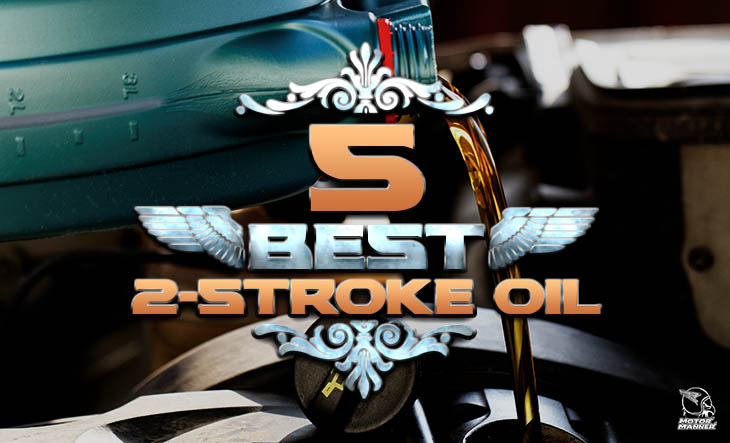 Top 5 Best Two-Stroke Oil: Which One Should You Get?

Two-stroke dirt bikes are definitely back on hype as more and more people are into them. With that said, manufacturers are also fattening up their shelves when it comes to these bikes with simpler engines. KTM, Beta, Sherco, Yamaha, and other bike companies are making a comeback with two-stroke bikes.

Along with the bikes, two-stroke or two-cycle motor oil is also in demand. If you’re a two-stroke bike enthusiast or just starting out, this article is for you. Unlike cars, two-stroke bikes need its oil changed a lot more frequently, to ensure the engine is in top condition. To give you an idea of the frequency, most 2-stroke bike users would know that they should change every other ride. Figuring out the best 2-stroke oil to use for your bike is not an easy task. This article aims to help you out on picking out which fits your bike just right and at the same time point out other aspects like price, availability, and others.

At this point in reading, it is important that you know what type of dirt bike you have. It is recommended to properly read your user manual or call customer care to confirm if you have a 2-stroke dirt bike. If you already are very well informed with bikes, then you can skip this step.

The owner's manual also tells at what ratio 2-stroke oil and gasoline should be mixed. The range is usually from 1:100 to 1:8 so it is important to have a grasp on what proper ratio is for your dirt bike. It also doesn’t hurt to use a measuring cup when mixing oil and gasoline – it may not look cool for others to see when using a cup and all but it can make mixing way easier and more accurate.

**Below, you'll find my more detailed reviews about the 2-stroke oil, but you can also click the links above to see current prices or read customer reviews on Amazon.

When Do You Need To Change Your Motorcycle’s Oil?

What Are Two-Stroke Engines, By The Way?

First of all, the two primary functions of a two-stroke engine are combustion and compression. Simply put, the engine will fire and then ignite the spark plug per revolution of its crankshaft. In effect, this makes the dirt bike very light compared to heavier bikes.

Two-stroke engine bikes are way faster since they’re lighter than four-stroke bikes. They also have the same intense kick. Also, two-stroke bikes need more frequent shifts in gears but at top speed, they get more power.

Here’s a graphic representation on how two-stroke engines work:

When And How Do I Change Oil In My Two-Stroke Bike?

While changing the oil on a 2-stroke dirt bike is easy, it is important to note that its maintenance needs to happen quite a lot frequently. On the bright side, it only takes a few minutes to perform. To be able to achieve optimum performance, it is recommended that you’d change oil every 5 hours of ride time. If the ride is rough, then it should be shrunk to every 3 hours.

Here’s one simple guide to do so:

This best 2-stroke oil reviews will help you to decide quickly which products is the best choice for your motocycle. 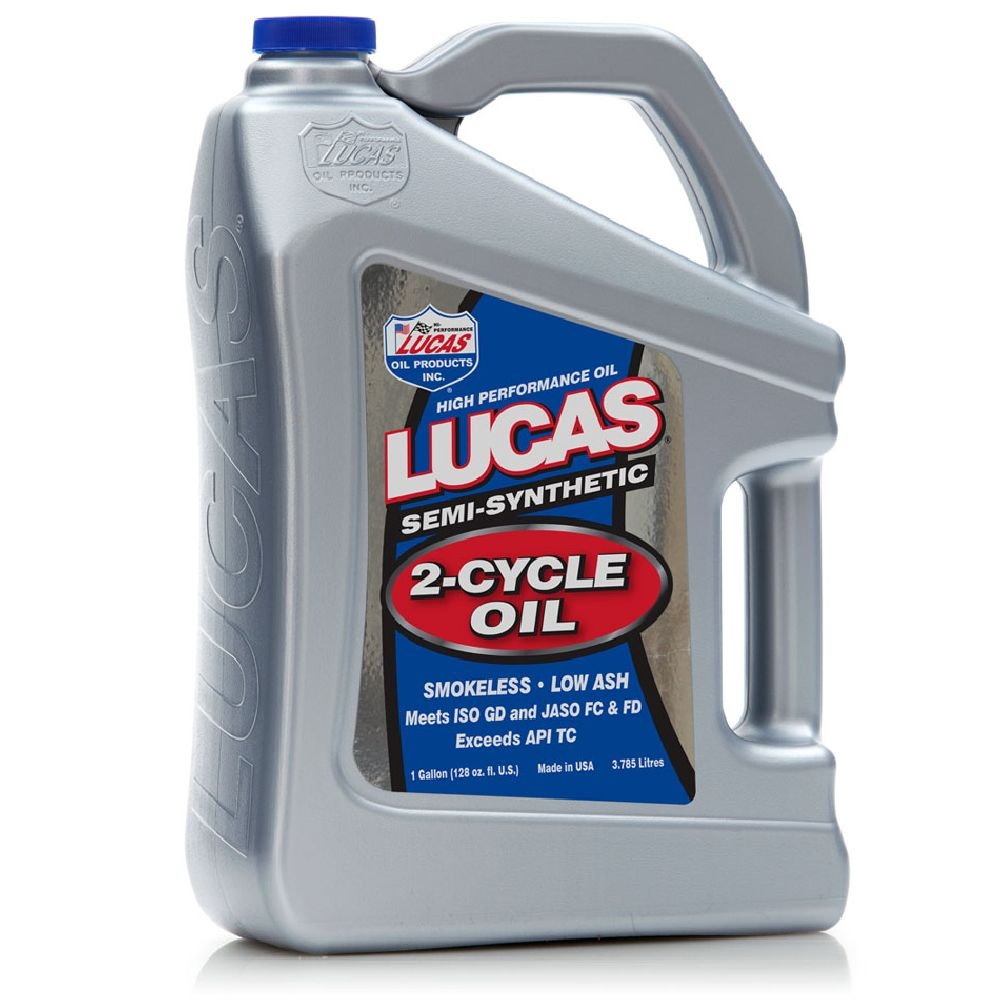 Suitable for use in air-cooled engines

Produced by Lucas Oil themselves, this Semi-synthetic 2-cycle oil is smokeless. The emissions are burned, thus the ‘smokeless’ effect. This increases fuel economy and at the same time performance. The product also claims that it can lengthen engine life and no filter clogging. Last, it also claims to have clean burning formulation. This indeed has earned a spot in our top 5 best 2-stroke oil. 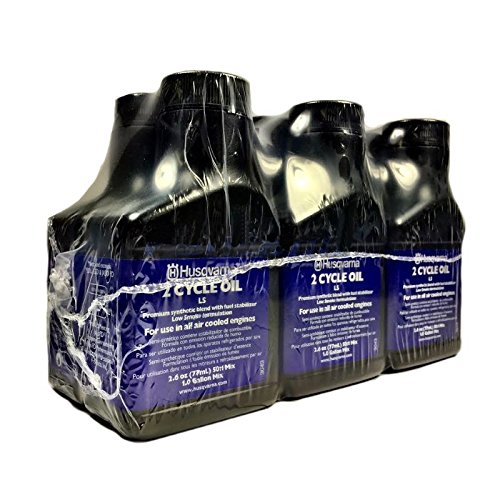 Blends with broader range of fuels

Another entry for our top 5 best 2-stroke engine oil that meets and also exceeds the current oil specifications for ISO-EGD and JASO-FD a couple of world standards. This oil also exceeds the latest APITC Spec requirements. Usage of this oil is recommended to be mixed with gasoline, and the ratio should be 2.6 oz oil per gallon of gas. This oil is produced in-house by Husqvarna. 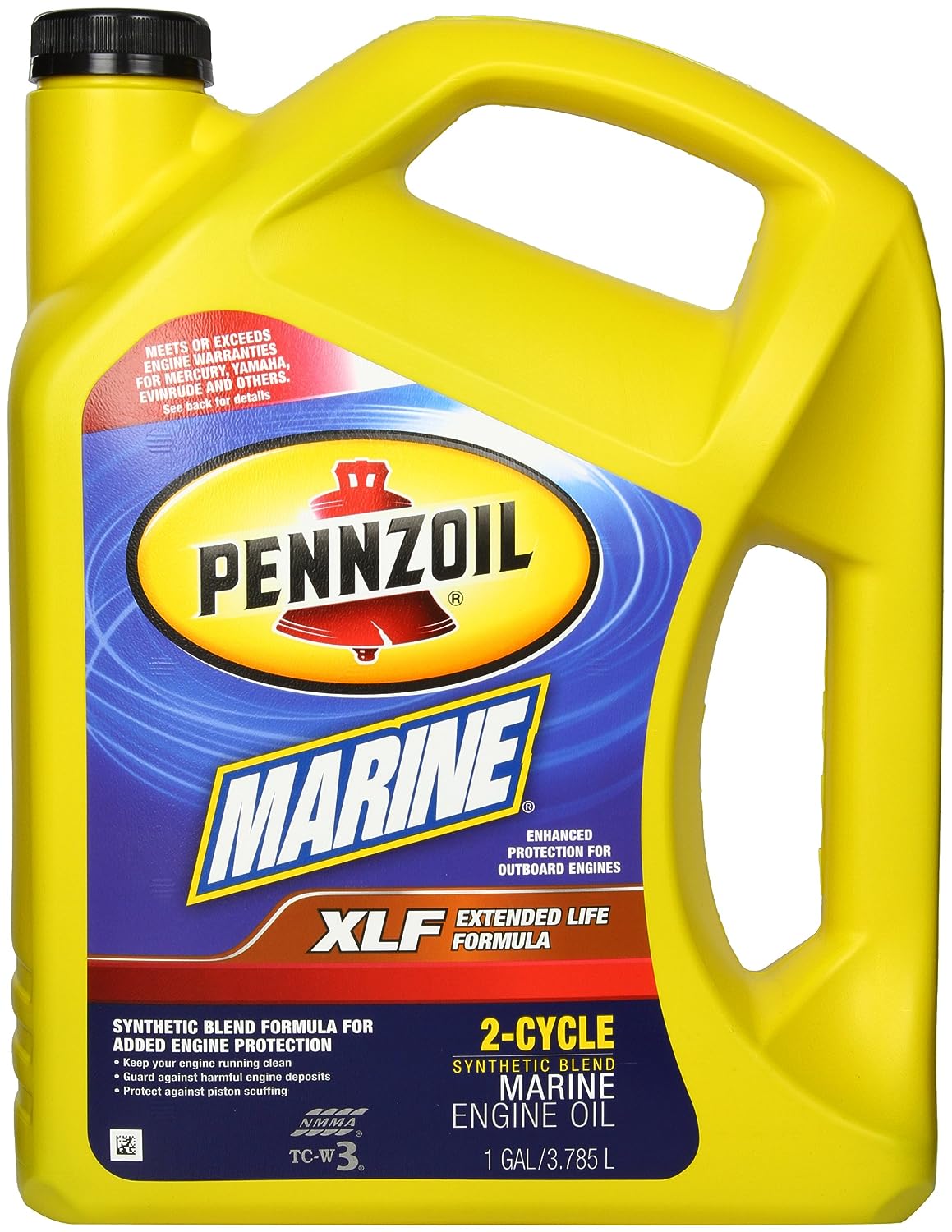 Pennzoil Marine XLF Extended Life Formula Outboard 2-Cycle Synthetic Blend Oil was intended for engines that are already seasoned or have been in use for a few years already. It has a robust formulation that extends the life formula outboard a 2-cycle synthetically blended oil.

This is very suitable for higher cc engines that are either direct injected or carbureted. In terms of safety, it helps prevent any pre-ignition and spark plug fouling. Still, this made it to our list of best 2-stroke oil. 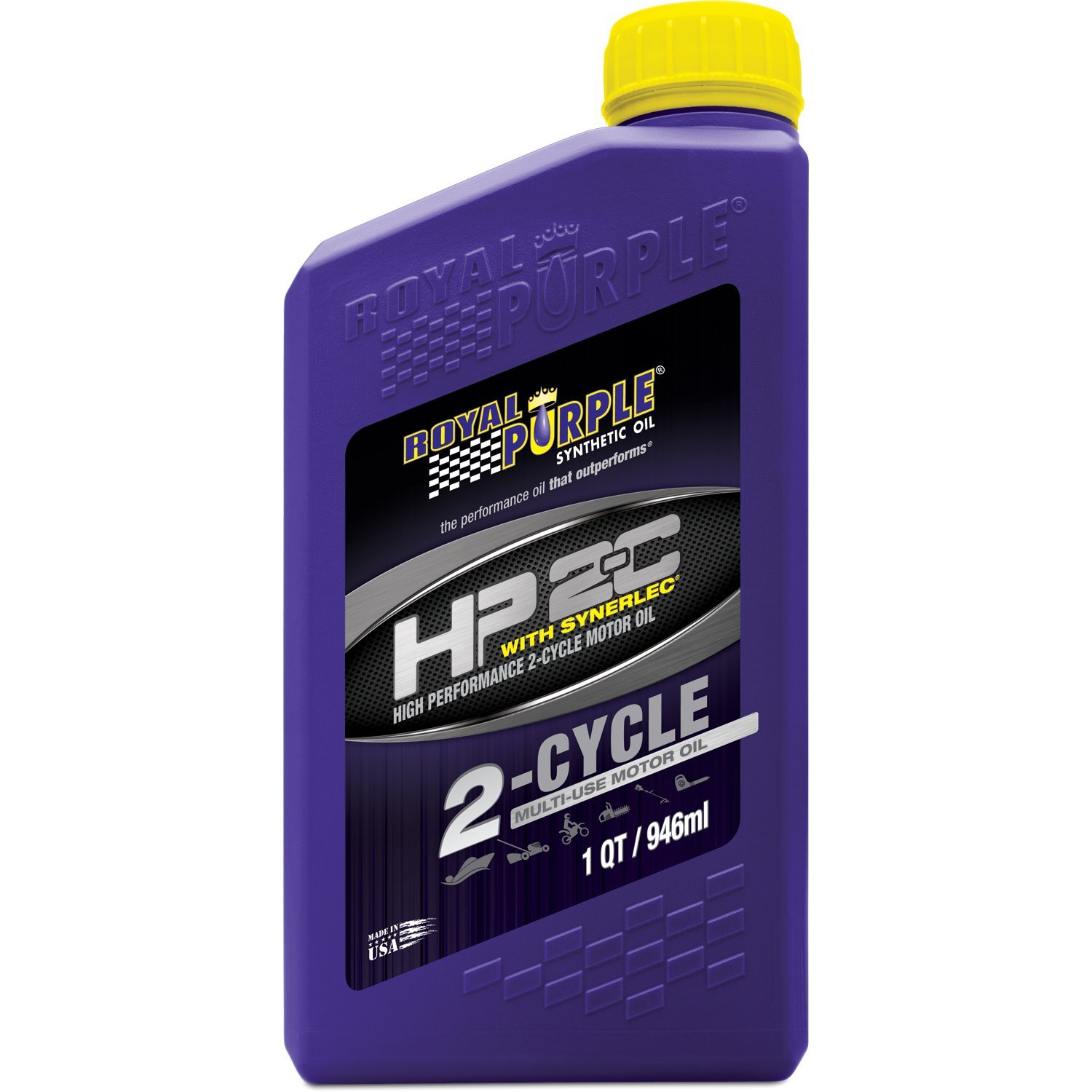 Fourth entry for our best 2-stroke oil is HP 2-C. It is a high-performance engine oil can improve performance and reduce wear in two-cycle gasoline engines. Its synthetic solvency would keep exhaust ports and spark plugs clean. Its performance advantages are due to a blend of synthetic oils and Royal Purple’s proprietary Synerlec additive technology. 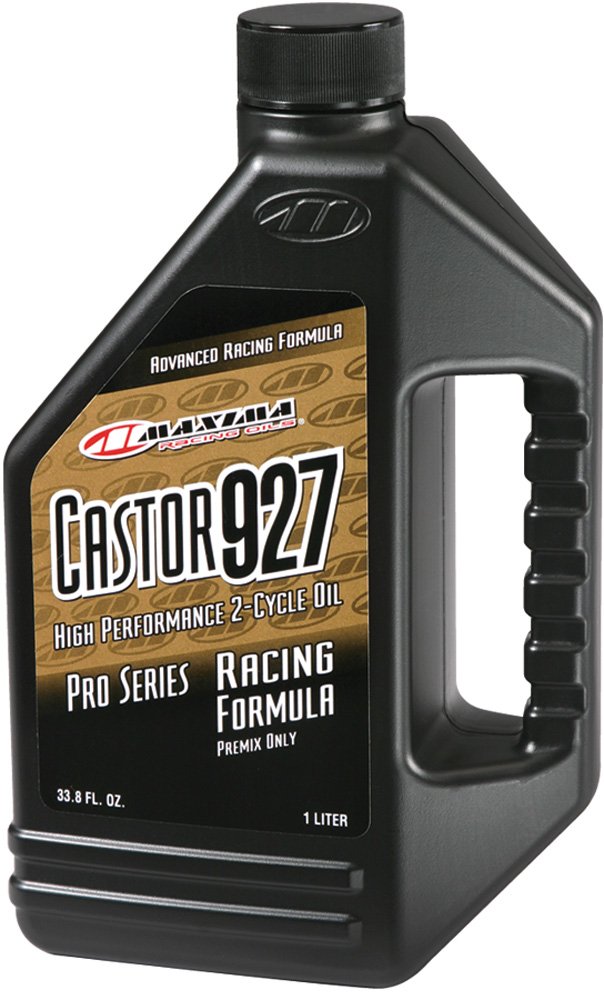 Castor 927 is a one-of-a-kind blend of a very refined castor oil, a special synthetic and an additive system that will reduce gum formation and carbon. It also protects against rust. On top of that this contains exclusive additives that keep power valves cleaner. This oil is also biodegradable so the less you have to worry about mother nature. A bit of caution as this oil is not intended for oil injection systems.

My Pick For The Best Two-Stroke Oil

Ultimately, I have to pick one of them as my trusty engine oil. If I ever have to choose between these 5 2-stroke oils, I’d be having a hard time but would pick: Royal Purple 01311 for the best two-stroke oil. This oil is technically a full synthetic oil, which means crude oil is not part of it.

Synthetic oil can also be used in engines instead of traditional motor oils that are refined from crude oil. Synthetic also provides superior performance over traditional oils. It also produces amazing mileage and decreases engine wear on extreme temperatures. It may be a bit expensive but it sure is worth it so this make it my best 2-stroke oil.

Two-stroke oil is quite different compared to four-stroke oil. The former does not have weight indications, for one. On top of that, two types of 2-stroke oil are on the market namely pre-mix and injector safe. Dirt bikes mostly fall under pre-mix and usually are combined with gasoline. Both 2-stroke and 4-stroke oil have the same purpose – keeping engines lubricated. The subtle difference is that 4-stroke oil resembles mostly of that used in car engines and they come in a range of weights such as 10w-40, 20w-50, among others. Also, 4-stroke oil is not mixed with gasoline when used on bikes.

Until today, dirt bike riders have a never-ending debate on which engine type is better. It is also common in discussions that whenever the said topic is sparked, it will branch into endless arguments. At the end of the day, it would be safer to side the fact that two-stroke engines and four-stroke engines are incomparable as each has his own preference.

Regardless if beginner or not, it is important to note that understanding the differences would lead to certain advantages, not just in races but also in the hobbyist’s pocket. There is obvious difference between the two engines, and the most important thing to remember is that the two-stroke engine equals that of a higher cc four-stroke counterpart. Simply put, a two-stroke 125cc engine is equal to a 4-stroke 250cc.

By rule of thumb, the higher the cc on the engine the more costly the dirt bike’s maintenance will be. This means four-stroke engines are by default more expensive. A 125cc two-stroke is as powerful as a 250cc four-stroke but is cheaper to maintain. All in all, it should end up with each individual’s ‘preference’.

Here’s a race between a two-stroke bike and a four-stroke bike, you be the judge of who really wins:

We hope that after reading this article, you get more information to choose the best product for your motorcycle! If you liked it, feel free to leave comments on what you think of our two-stroke oil reviews!